Starring Hilary Swank, Chloë Sevigny
inspired by the real life story of Brandon Teena
I knew who she was. She said she had to get her head back together. She wanted to come back to her old life and her old life was Teena Brandon. - JoAnn Brandon (Teena's Mother), 2000

Was the real Lana Tisdel happy with Chloë Sevigny's portrayal of her?

No. The real Lana Tisdel sued the filmmakers, claiming that they depicted her as a drug-addicted drunk, citing that the movie makes references to her as "lazy, white trash and a skanky snake." The film also falsely depicts Tisdel falling asleep at the murder scene and "doing nothing about it after it has occurred," as stated in Tisdel's lawsuit.

How did Brandon Teena's mother, JoAnn Brandon, react to the film Boys Don't Cry?JoAnn Brandon was outraged by the film's portrayal of Brandon. In early 2000, JoAnn, who could not work because of severe asthma, still owed money for her son's funeral. She said that she was irritated that a fund set up to pay for the funeral received meager contributions, while others, such as the filmmakers, profited from Brandon's death. "I'm really sick and tired of people making money off my child," JoAnn said in an Associated Press article. "I don't understand how you can put three weeks of somebody's life up on film and win an award for it."

The filmmakers did not interview Brandon Teena's mother, JoAnn, for the film that they were making about her transgender son. JoAnn was upset that they also neglected to interview Brandon's close friends and relatives. -The Associated Press

Brandon's mother, JoAnn Brandon, was upset that Hilary Swank referred to her transgender son in her speech as "Brandon Teena," her biological daughter's male name. "That set me off," JoAnn Brandon said. "She should not stand up there and thank my child. I get tired of people taking credit for what they don't know."

What does Brandon's mother believe made her daughter want to become a man?

Brandon Teena childhood photo.
JoAnn, Brandon Teena's mother, was upset that the filmmakers failed to explain that for several years when Brandon was a young girl, he had been sexually molested by a man. JoAnn said that "Teena" sought counseling in 1991, and began to dress in men's clothing and date women as a defense strategy. "She pretended she was a man so no other man could touch her," JoAnn said in an Associated Press article.

Had Brandon's mother been in touch with her transgender son at the time of his death?

His mother last spoke to him on December 30th, the day before Brandon's death. His mother said that she had clearly spoke to a woman. -The Associated Press

How did the local townspeople react to the film when it opened?

The Nebraska farmhouse where the three murders took place.
Reactions from the locals of Falls City, Nebraska were less than complimentary. The film depicted most of them as drunks. "It's nothing like the town that's in the movie," said Virginia Ernst, a local Falls City movie theater manager. Resident Jared Kirkendal agreed. "That's not Falls City," he said at the end of the film. Kirkendal also commented in an Associated Press article, "It's weird they made it more of a love story than a crime."

What did Sarah Nissen, cousin of attacker Tom Nissen, think of the film?

An 18-year-old high school student at the time of the film's release, Sarah Nissen, cousin of attacker Marvin Thomas Nissen, said that everything that Tom told her about the actual events indicates that the film's storyline is wrong. "There's none of it that's right," she said. "It was just weird."

What has become of Brandon Teena's killers, John Lotter and Tom Nissen?

John Lotter is on death row awaiting execution in the state's electric chair. Tom Nissen is serving a life sentence in prison. Nissen's sentence came after he agreed to testify against Lotter. The two men were convicted of the murder of Brandon Teena, whose birth name is Teena Brandon, before she began to pose as a man. They killed the 21-year-old in an attempt to silence him after he told the police that the two men raped him when they learned of his biological gender. Two others who were witnesses to Brandon Teena's murder were also killed at the scene by the two men.

Does Kimberly Peirce, writer and director of Boys Don't Cry, believe her film is true to the real story of Brandon Teena? 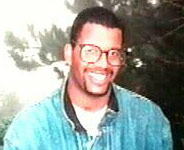 Phillip DeVine, who was also murdered at the scene, was not depicted in the movie.
Kimberly Peirce said that she is aware that she took dramatic liberties with the film. One of these liberties includes the exclusion of the second witness, Phillip DeVine, age 19, who was also murdered at the scene along with Lisa Lambert, 24, and Brandon Teena, 21. DeVine had been dating Lana Tisdel's sister at the time and was staying at Lisa Lambert's home.

Was Boys Don't Cry based on the book All She Wanted by Aphrodite Jones?No. Aphrodite Jones did however file a lawsuit against Fox Searchlight, claiming that the studio backed out of a deal that involved her book All She Wanted being turned into a movie with Drew Barrymore. She claimed that the studio backed out when they discovered Boys Don't Cry and purchased the rights to that film instead.

It was quite a drastic transformation for the actress, Hilary Swank (pictured both left and right above). It was a transformation that yielded her a Best Actress Oscar and future roles in films like Insomnia (2002) opposite Al Pacino.

Listen to a recording of Brandon Teena being questioned by the police, which occurred when he went to report that he had been raped by John Lotter and Tom Nissen. Also, view the Boys Don't Cry movie trailer.