Starring Jeff Bridges, John Goodman, Julianne Moore, Steve Buscemi
The body language is one hundred percent me in the movie. Do I drink White Russians all the time? No. ... The reason it was White Russians is you could have a lot more fun with a White Russian than you can with say, a vodka soda. - Jeff Dowd (HuffingtonPost.com, 2013)

How much of The Big Lebowski movie is based on a true story? 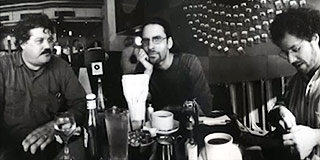 Jeff Dowd (left) with Joel and Ethan Coen, the directors of The Big Lebowski, in the 1990s.
While many Hollywood films claim to be either inspired by or based on a true story, that was not how the The Big Lebowski got rolling. The movie's plot is almost entirely fiction. Rather than the story being based on a person's life, the Coen brothers instead chose to base only their protagonist, Jeffrey Lebowski (Jeff Bridges), on a real person. That person is Mr. Jeff Dowd (aka The Dude), who they considered to be quite the character. 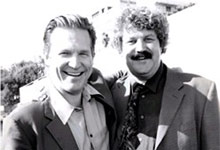 The two "Dudes", Jeff Bridges (left) and Jeff Dowd (right) circa 1998.
Is the real Jeffery Lebowski known as "The Dude"?

Yes. According to Dowd, he received the nickname back in the sixth grade from a few friends and it is simply a play on his real last name that stuck. -The Wrap

He often drank whatever the monthly cocktail trend was and White Russians happened to be one of them but it is unclear why that was officially chosen. That is not his drink of choice but he drinks them now to please fans. He refers to them as a good drink, "It's essentially a liquefied ice cream cone that you can buy in a bar." -New York Times

Is the real Lebowski, Jeff Dowd, truly a slacker? 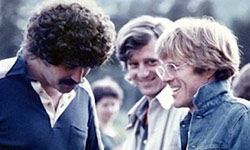 Jeff Dowd (left) with Robert Redford (right) in the early 1980s. A founding member of Sundance, Dowd was hardly a slacker.
You can't judge a book by its cover. Dowd's flamboyant and often grungy attire may make him look like a slacker to most but that is not the case. The movie was inspired by close to a year of his real life during which time he could have been labeled a slacker. For the majority of his life, he has not been a slacker. In truth, he has been a film marketing and distribution guru for decades, a producer, a producer's representative, a founding member of the Sundance Film Festival, a writer, a political activist known for being a member of the Seattle Seven, as well as a father to two daughters, Keely and Annabelle. All of this in addition to being the cult classic icon you have come to adore.

Is the real Dude from Big Lebowski an avid bowler like the character in the movie? 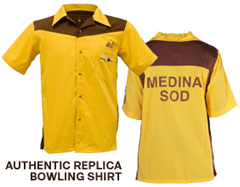 Buy the Authentic Replica Big Lebowski Bowling Shirt.
No. Like most people, he has bowled but he is not a bowler. During his time assisting the Coen brothers with marketing for their 1984 movie Blood Simple, Jeff had the idea to throw a massive party at a bowling alley. Its impressive turnout seems to have stuck in their minds, spawning the integral plotline. -NBCNews

Was the rug that "really tied the room together" inspired by real life?Yes. According to Peter Exline, a friend and associate of the Coen brothers, the rug that "really tied the room together" is based on comments made in 1989 when he had directors Joel and Ethan Coen over for a barbecue one night. During the evening, he would stop in between telling a story to ask the Coen brothers, "Doesn't this rug really tie the room together?" The comment apparently stuck with the Coens and inspired the popular Walter Sobchak quote. -The Achievers

How did the Coen Brothers meet Jeffrey Dowd, their inspiration for The Dude? 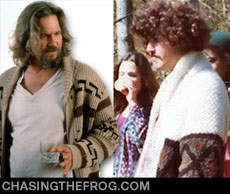 Buy The Dude's Sweater. The Coen brothers modeled Lebowski's relaxed look after Dowd, pictured at right in the late 1970s.
Joel and Ethan Coen met Jeff Dowd when he was working behind-the-scenes on distribution and promotional strategies for their 1984 film Blood Simple. Working closely with Dowd, the Coen brothers soon discovered that his nickname was "The Dude". They joked with him about it and began picking up on some of Dowd's weird mannerisms and character traits. "After that, the rest is history," says Dowd. -The Dude Documentary

Are the stolen car, the homework and Little Larry based on a true story?

Yes. According to Peter Exline, a friend of the Coen brothers, this happened to him in real life. His car was stolen and when he went to the impound lot to recover it, he found an eighth grader's homework in the backseat. That eighth grader was Jaik Freeman. In The Big Lebowski documentary The Achievers, Jaik defends himself by saying, "I loaned it to a friend of mine and he had left it in the car." In real life, Peter and part-time private investigator Lew Abernathy went to Jaik's house to confront him. When they arrived, there was a man in a hospital bed in the living room like in the movie. Like Walter Sobchak, Lew really did bring the homework sealed in a plastic bag to present as evidence. Peter Exline told this story to the Coen brothers during a 1989 dinner. -The Achievers

Had Jeff Dowd really been a member of the "Seattle Seven" like Jeff Bridge's character had been in the movie? 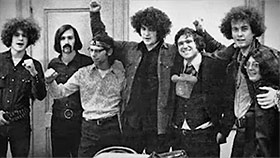 Jeff Dowd (center) with the other members of the antiwar group the Seattle Seven. Circa 1970.
Yes. In the movie, The Dude (Jeff Bridges) tells Maude (Julianne Moore) that he had been a member of the "Seattle Seven". The real Lebowski, Jeff Dowd, had been an active proponent of the antiwar movement during the Vietnam War. "I felt very strongly about the Vietnam War," says Dowd, "that I had to make a stand." At the age of eighteen, he joined a group called the Seattle Liberation Front (SLF), turned in his draft card, and planned to eventually refuse induction.

In 1970, following a February demonstration over the jail sentences of a group of protesters in Chicago (known as the Chicago Seven), Dowd, along with six other individuals, was charged with "conspiracy to destroy government property" and "crossing a state line to incite a riot." Dowd and his co-conspirators became known as the Seattle Seven. During the trial, Dowd and the others draped a huge Nazi flag over the judge's bench, feeling that the judge had been acting "like a good German." They were subsequently charged with "contempt of court" and sentenced to twelve months in McNeil Island Federal Penitentiary. -The Dude Documentary

How has the movie's popularity changed Jeffrey Dowd's life?Despite the movie's initial lackluster performance at the box office, its surge in popularity over the years as a cult classic has turned the real Dude from Big Lebowski, Jeff Dowd, into an iconic figure among the movie's fans. He often travels the country to make headlining appearances in front of Big Lebowski fans (known as Achievers). These appearances include the popular Lebowski Fests and speaking on college campuses. Dowd is also still active politically, both through speaking publicly and by way of making appearances at events like Occupy LA.

Recall all of your favorite moments from the Coen Brothers' film with the help of The Big Lebowski movie trailer that can be viewed below.