Starring Meryl Streep, Nicolas Cage, Chris Cooper
based on the book "The Orchid Thief" by Susan Orlean
I have to admit, I didn't actually read it; I just started flipping through [it]. I got to a point where I started seeing Orlean, Orlean, Orlean and I thought, 'Wait a minute. Orlean, Orlean, Orlean?' I didn't read the script that night, I just flipped forward trying to figure out what this was. - Susan Orlean

Did Charlie Kaufman's real life experience with writing the Adaptation screenplay at all resemble his fictional character's experience in the film? 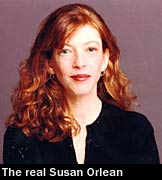 Yes, Charlie Kaufman was stumped on how to approach the screenplay in real life as well. In an interview, Kaufman said that for weeks he woke up feeling like he couldn't do it. Jonathan Demme's company had hired him to adapt Susan Orean's The Orchid Thief, and it was only after coming up with the adaptation parallel that things began to fall into place. After turning in the finished screenplay, Kaufman got the feeling that producer Ed Saxon was a little upset by what Kaufman had done, but after a second read through and input from his peers, Ed quickly saw the brilliance in Kaufman's work.

What did Susan Orlean think about Kaufman's screenplay portraying her as a drug-snorting wreck?In an interview Susan said the following, "...the idea of being portrayed as a drug-snorting [mess] just didn't square with me. Also, on another level, I thought, 'I don't want to be a character in a movie.' Even though I'm used to having my by-line published and so forth, it just seemed too public. It made me think I don't want to be that exposed. It wasn't even the idea that the character had unsavory habits, it was more that I was uncomfortable with just having my name being in a movie."

What changed Susan's mind toward the film including her as one of its characters, especially one who develops a drug habit?

In an interview, when speaking about her conversations with Adaptation producer Ed Saxon, Susan said the following, "First Ed said to me, 'Everybody in the movie is using - I realize this is probably the way cops do it in interrogations - 'Susan' is going to use her name. Everyone else in it is going to use their names and we really want to be able to use your name.' I said, 'But I feel funny. Here I am using drugs and having sex with my subjects.' He said, 'Susan, look at Charlie. Charlie is masturbating through the whole movie using his name.' And I thought, 'You know, he's got a point there. What am I complaining about?'"

The Orchid Thief: A True Story of Beauty & Obsession

How do you adapt a book about the world of orchid collecting into a movie? The struggle to do so became the basis for the movie Adaptation. Susan Orlean's book takes us into this passionate world via an obsessive collector named John Laroche. By the end, we're yearning to feel the same kind of passion for something, an effect the film couldn't reproduce.


Did Susan Orlean develop a sexual relationship with John Laroche in real life?

No, the true story reveals that in real life Susan Orlean did not develop any sort of intimate relationship with the orchid thief, John Laroche. In interviews she has explained that a unique relationship does develop due to the often lengthy period of constant contact with the subject, but she never lets such relationships turn sexual.

Have any of Susan's subjects ever fallen for her?

In an interview Susan said that this has happened, but that she never lets things advance. Orlean said that its easy for subjects to fall for writers who are doing a story on them, because as a writer you give your subjects a great deal of attention, and they often respond to someone so interested in their lives.

Did Susan Orlean really come into contact with aligators during her research for the book?Obviously, John Laroche didn't get attacked by an alligator in real life. However, Susan did see many alligators in the Fakahatchee swamp area, including baby ones that she said looked deceivingly cute.

Does Susan Orlean make an appearance in the movie Adaptation?

The real Susan Orlean did shoot a supermarket scene with Nicolas Cage, but it was cut from the final edit of the film.

Does Charlie Kaufman really have a brother named Donald?

No, there is no Donald Kaufman. He is a fictional character for the film created by Adaptation screenwriter Charlie Kaufman.

On January 21, 2003, Susan Orlean sat down with Chicago area radio talk show host John Williams to discuss her, at the time, new book, The Orchid Thief. Susan talks about going to awards shows for the movie Adaptation and seeing celebrities. She speaks of orchids and the orchid thief, John Laroche. It's an informative interview. We learn about the story from Orlean's perspective before it took on its "adapted" form.

Watch an interview with author Susan Orlean, who offers her thoughts on the movie. Also view the theatrical preview for the movie, which features the 1981 hit song "Under Pressure" by David Bowie and Queen.