Starring Chadwick Boseman, Harrison Ford, Nicole Beharie
based on Jackie Robinson and his signing with the Brooklyn Dodgers
It was an automatic fine if we didn't throw at him on the double play. Another man couldn't have taken that kind of abuse. It was a bad thing, but that's the way it was. - Whitey Wietelmann, former Pirates infielder (Pittsburgh Post-Gazette, May 15, 1987)

Had the real Jackie Robinson been arrested and court-martialed in the army?

Yes. The 42 true story reveals that Robinson had been arrested and court-martialed during boot camp for refusing to go to the back of a segregated bus, as explained in the movie. However, he was subsequently acquitted of the charges and was given an honorable discharge. -JackieRobinson.org

What does Jackie's widow, Rachel Robinson, think of the 42 movie? 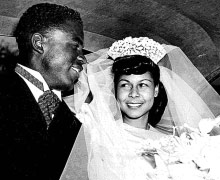 Jackie Robinson marries Rachel Isum on February 10, 1946 and would have 3 children. They met at UCLA in 1941.
The real Rachel Robinson and her two children, David and Sharon, have worked for the past 30 years trying to get the movie made. Prior to filming, she had offered detailed suggestions to the filmmakers on how to improve Brian Helgeland's script, "because I wanted to be sure they had an authentic picture," says Rachel. She is pleased that they chose to cast two unknown actors to play herself and Jackie, making the point that when famous actors are cast, "it's still about that actor and not about the person he's playing necessarily."

"As soon as I sat down and watched it, I was relieved. And excited," says Rachel, referring to the movie in general and her uncertainty with how the filmmakers would approach that period of history. -NYDailyNews.com

Did a reporter really help Jackie when he was brought into the Dodgers organization?

Yes. Wendell Smith, portrayed by Andre Holland in the 42 movie, was a sportswriter for the Pittsburgh Courier, a popular African-American newspaper in the 1930s and '40s. Smith was responsible for recommending Jackie Robinson to Brooklyn Dodgers General Manager Branch Rickey. Not only did he subsequently act as Robinson's traveling companion (sometimes out of necessity since they both often had to stay in segregated hotels), Smith was also the ghostwriter of Jackie Robinson's weekly 1947 newspaper column. In addition to Robinson, Wendell Smith recommended other standouts from the Negro leagues, including Larry Doby, Monte Irvin and Roy Campanella. -ChicagoTribune.com


Why was the reporter so determined to help Jackie?

The true story behind the 42 movie reveals that Wendell Smith's motivations for helping Jackie Robinson didn't just come from the fact that he wanted to some day be able to sit in the press box instead of the bleachers. The real Wendell Smith had firsthand experience with segregation in baseball. He played as a teenager in the 1930s and once threw a shutout in an American Legion game. After the game, a scout who had been in attendance told Smith that he wished that he could sign him but he couldn't. Instead, the scout signed the opposing pitcher. "That's when I decided that if I ever got into a position to do anything, I'd dedicate my life to getting Negro players into the big leagues," Smith said. -Post-Gazette.com

Did Jackie really toss a baseball to a young Ed Charles, who would later become a Major League Baseball player? 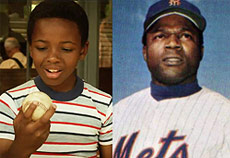 As a boy, the real Ed Charles (right) never got a ball from Robinson, but he did put his ear to the train tracks.
No. However, as a youngster Ed Charles did put his ear to the train tracks to listen as Jackie pulled away from the station. "I sat in the segregated section of the ball park and watched Jackie," said Charles. "And I finally believed what I read in the papers—that one of us had made it. When the game was over we kids followed Jackie to the train station. When the train pulled out, we ran down the tracks listening for the sounds as far as we could. And when we couldn't hear it any longer, we stopped and put our ears to the track so we could feel the vibrations of that train carrying Jackie Robinson. We wanted to be part of him as long as we could." -HistoryNet.com

As the movie states at the end, Ed Charles did grow up to win the World Series as part of the "Miracle Mets" team of 1969.

Did some of the players really start a petition against Jackie Robinson?Yes. During training camp, teammate Dixie Walker instigated a petition against Jackie Robinson. Though it was supported by some of the players, others like Pee Wee Reese refused to sign it. "It didn't matter to me whether he was black or green," Reese later said, "he had a right to be there, too." -NYTimes.com

Was Jackie Robinson hit in the head with a wild pitch from the Pittsburgh Pirates Fritz Ostermueller?

In examining the 42 movie true story, we discovered that Pirates pitcher Fritz Ostermueller hit Jackie in the elbow during that 1947 game, not the head. The only reason the pitch didn't hit him in the head was that Jackie lifted his arm to shield his face. Former Pirate Jim Russell later said that Ostermueller had been ordered to take Robinson down. Overall, Jackie was hit by nine pitches during his rookie season. -Pittsburgh Post-Gazette

Did the real Jackie Robinson smash his bat in private after enduring racial insults from manager Ben Chapman and the Phillies team?

No. In researching the true story, it quickly became clear that this scene never took place in real life. Although Phillies manager Ben Chapman's racial slurs are definitely based in fact, Robinson never fell apart in a tunnel behind the Dodgers dugout, smashing his bat against a wall and breaking it into pieces. Thus, he was never subsequently consoled by Dodgers General Manager Branch Rickey, who happens to be standing nearby in the movie. Actor Chadwick Boseman tried to justify this scene by saying, "At some point he had to break, and the fact that Rachel Robinson didn't fight us to take (the scene) out (of the film), to me proves that it is true." -Reuters.com

Was Phillies manager Ben Chapman really asked to pose with Jackie Robinson for a photo op? 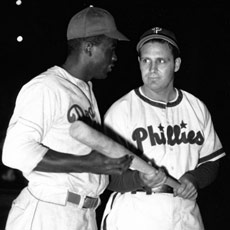 Robinson and Ben Chapman are asked to pose together after Chapman's racial slurs caught the attention of the press.
Yes. The orchestrated moment between the real Ben Chapman and Jackie Robinson is shown at left. As in the movie, the photo op was set up to help get Chapman and the Phillies out of hot water with the press (and the league commissioner) after Chapman and his team's racial slurs toward Robinson sparked headlines. In his autobiography, Robinson revealed that posing with Chapman was one of the hardest things he ever had to make himself do. When speaking to black reporters, Chapman explained his actions like his character does in the movie, that riding opposition players was the Phillies style of baseball.

Years later, Dodgers general manager Branch Rickey commented, "Chapman did more than anybody to unite the Dodgers. When he poured out that string of unconscionable abuse, he solidified and unified thirty men, not one of whom was willing to sit by and see someone kick around a man who had his hands tied behind his back—Chapman made Jackie a real member of the Dodgers." -Jackie Robinson Autobiography

Did baserunner Enos Slaughter really spike Robinson in the leg when crossing first base?Yes. Whether Enos Slaughter intentionally spiked Jackie Robinson has been the subject of controversy over the years. Slaughter was known for his aggressive and at times dirty style of play, also spiking Giant infielder Bill Rigney that same year and injuring a number of other players on various occasions. With regard to whether his stepping on Robinson was racially motivated, Enos Slaughter responded, "I've never in my life spoke against a black player. I was accused of spiking Jackie Robinson, but I stepped on a lot of players." -NYTimes.com 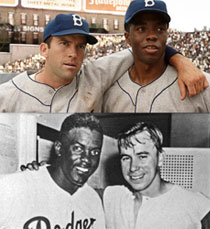 Yes. However, there is no photograph of this moment and whether Reese put his arm around him, his hand on his shoulder, or simply stood beside Robinson is unclear. The one thing that is clear is that Pee Wee Reese saw his friend and fellow player being taunted, and he came over to stand by his side. "I remember Jackie talking about Pee Wee's gesture the day it happened," Rachel Robinson recalled in 2005. "It came as such a relief to him, that a teammate and the captain of the team would go out of his way in such a public fashion to express friendship." A statue commemorating this act of kindness was unveiled in 2005 in front of KeySpan Park, a Brooklyn ball field. -NYTimes.com

Explore the 42 true story by watching the full 1950 movie The Jackie Robinson Story in which he plays himself. Also, view interviews, a short biography and the 42 movie trailer.