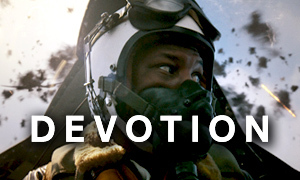 Devotion: History vs. Hollywood
War  |  Does this film about the first black Navy pilot stick to the facts of Jesse Brown's story? 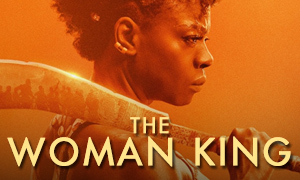 The Woman King: History vs. Hollywood
War  |  How much of the Kingdom of Dahomey's troubling history is brought to light in the movie? 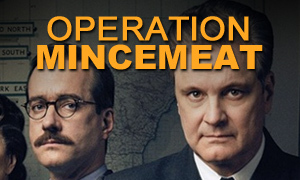 Operation Mincemeat: History vs. Hollywood
War  |  A group of British intelligence officers during WWII develop a plan to plant deceptive documents on a corpse in order to fool Hitler. 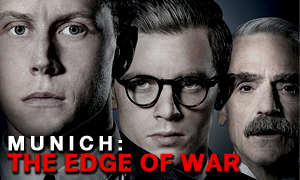 Munich The Edge of War: History vs. Hollywood
Political  |  How much of this Netflix spy thriller is historically accurate? 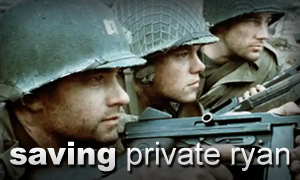 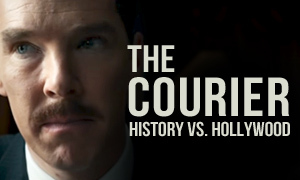 The Courier: History vs. Hollywood
War  |  We sift through this Benedict Cumberbatch spy thriller to uncover what is fact and what is fiction. 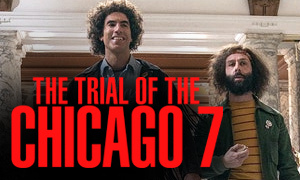 The Trial of the Chicago 7: History vs. Hollywood
Political  |  Aaron Sorkin's latest directorial effort is a one-sided take on a two-sided series of events surrounding the 1968 Democratic National Convention. 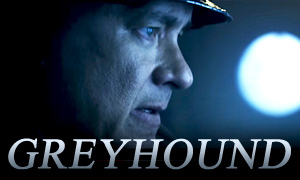 Greyhound: History vs. Hollywood
War  |  Which aspects of the Tom Hanks naval thriller are rooted in history? 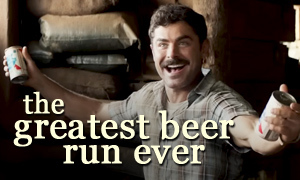 The Greatest Beer Run Ever: History vs. Hollywood
War  |  How much of this movie about a man who takes beer to his friends serving in Vietnam is based in reality? 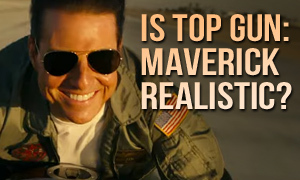 Top Gun: Maverick Reality Check
War  |  Does the Tom Cruise blockbuster stay grounded in reality? We examine the planes, the flying, and the plot. 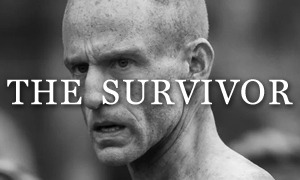 The Survivor: History vs. Hollywood
War  |  How much of this movie about a concentration camp prisoner who boxes to survive is based on the real-life account? 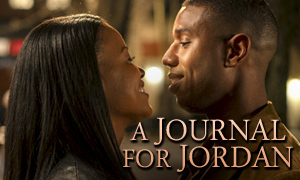 A Journal for Jordan: History vs. Hollywood
War  |  Meet the real people behind this Denzel Washington-directed movie about a soldier (Michael B. Jordan) who pens a journal for his infant son. 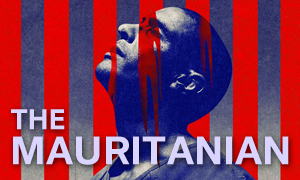 The Mauritanian: History vs. Hollywood
Political  |  Jodie Foster portrays a lawyer who fights to free an uncharged Gitmo detainee, but is the case the movie presents accurate? 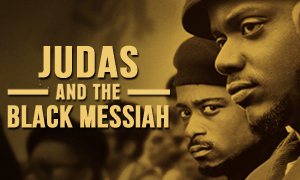 Judas and the Black Messiah: History vs. Hollywood
Political  |  Black Panther Fred Hampton (Daniel Kaluuya) is betrayed by FBI informant William O'Neal (LaKeith Stanfield) in a movie that tries to stick relatively closely to the facts. 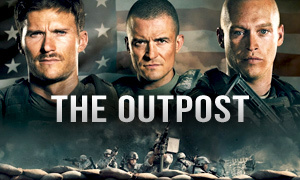 The Outpost: History vs. Hollywood
War  |  Does this story of an outnumbered group of U.S. soldiers in Afghanistan stick to the facts?

Mrs. America: History vs. Hollywood
Political  |  Hollywood takes aim at conservative activist Phyllis Schlafly, but is its depiction the truth?


ALL TRUE STORY War / Political Movies
Go behind enemy lines as we present our research into true war movies. Here, you will also find political movies inspired by true stories. Whether it's a mission to rescue civilians trapped in a country that has turned hostile like in Argo, or a ferocious battle to stop the Persian invasion of Greece like in 300, war movies based on true stories often provide a suspense-filled, unflinching glimpse at what it's like to be on the tripwire of death, facing constant fear while functioning on adrenaline and the desire for self-preservation. Of course, some movies only embrace the heroism and explosions, while leaving out the brutal reality. We attempt to confirm the truth and fill in the gaps.

Devotion
Two U.S. Navy pilots develop a bond of brotherhood as they fly combat missions in the Korean War.

The Greatest Beer Run Ever
A man decides to bring beer to his childhood friends serving in Vietnam.

The Woman King
Does the movie tell the whole story of the Kingdom of Dahomey and its female warriors?

Top Gun: Maverick
How realistic is the sequel? We examine the flying, the pilots, and the plot.

Operation Mincemeat
To trick the Nazis, the British place fake documents on a corpse posing as an officer. Is the WWII movie accurate?

The Survivor
Does this story of a Holocaust survivor who boxed fellow prisoners keep the facts in the ring?

Munich: The Edge of War
Two former classmates who work for rival governments meet to discuss peace in the lead up to WWII.

A Journal for Jordan
Denzel Washington directs this fact-based story of a soldier who authors a journal for his infant son.

The Courier
How much fiction is smuggled into this story about Cold War spy Greville Wynne?

The Mauritanian
A man is held without charges at Guantanamo as an attorney (Jodie Foster) fights for his freedom.

Judas and the Black Messiah
Are the facts preserved in this story of slain Black Panther Fred Hampton?

Greyhound
Based on a novel, the Tom Hanks film was inspired by a real-life WWII battle.

The Outpost
How accurate is this story of a small force of U.S. soldiers who defend their outpost from hundreds of Taliban?

Sergio
UN diplomat Sergio Vieira de Mello finds himself in a perilous situation in the aftermath of the US invasion of Iraq.

Mrs. America
Hollywood finds the villain in conservative activist Phyllis Schlafly, but is it the truth?

The Last Full Measure
Is this story about an Air Force pararescueman's heroism true to history?

1917
Two WWI soldiers are tasked with delivering a message that could save hundreds of lives, but did it happen?

Midway
Is director Roland Emmerich's version of the WWII Battle of Midway accurate?

The Best of Enemies
A civil rights activist works with a Klan leader, but is the story accurate?

Vice
Christian Bale captures Dick Cheney physically, but does the movie bear any resemblance to the truth?

Outlaw King
How accurate is this film about the 14th century Scottish 'Outlaw King' Robert the Bruce?

22 July
How true is this film about Norway's worst terrorist attack, which claimed the lives of 77 people?

Operation Finale
In 1960, a group of secret agents attempt to capture Adolf Eichman, an architect of the Holocaust.

The 15:17 to Paris
Is this Clint Eastwood movie more accurate because the heroes portray themselves?

12 Strong
A U.S. Special Forces team works with an Afghan warlord to take down the Taliban. Starring Chris Hemsworth.

The Death of Stalin
Russia banned the movie, a dark comedy that stars Steve Buscemi as Khrushchev.

The Post
Is this story of a newspaper publisher's decision to publish government secrets accurate?

Darkest Hour
Gary Oldman portrays Winston Churchill during the early days of WWII, but is the movie accurate?

Megan Leavey
Megan Leavey fights to adopt her combat dog Rex in the years after they survive an IED explosion.

The Promise
We reveal how much of The Promise is based in reality and explore the controversy around the movie.

The Zookeeper's Wife
Meet the real couple who hid hundreds during the Nazi occupation of Warsaw.

Patriots Day
A chronicle of the Boston Marathon bombing and subsequent terrorist manhunt.

Hacksaw Ridge
Mel Gibson directs the story of a WWII Medal of Honor winner who never fired a shot.

The Crown
Meet the real people behind more than 16 characters from the Netflix series and find out how much is fiction.

War Dogs
Is the real story of these two stoner arms dealers as exciting as the movie?

Anthropoid
This story of the assassination of SS officer Reinhard Heydrich is refreshingly accurate.

Free State of Jones
Matthew McConaughey is a farmer who rebels against the Confederacy during the Civil War.

The Finest Hours
Does the truth stay afloat in this story of a perilous Coast Guard rescue mission?

The Big Short
Meet the key players in the housing market crisis who are represented in The Big Short movie.

Texas Rising
Does Texas Rising retell or rewrite the rise of the Texas Rangers?

Woman in Gold
Does this story of a woman who fights to reclaim a painting stolen by the Nazis smudge the facts?

American Sniper
Does this Clint Eastwood film take aim at the truth?

Unbroken
Does the truth remain unbroken in this story of an Olympian and WWII hero?

The Imitation Game
Is this Alan Turing biopic cryptic when it comes to the truth?

The Railway Man
Colin Firth portrays Eric Lomax, a WWII POW who tracks down one of his former captors for closure.

The Monuments Men
Does director George Clooney paint over the facts with too much fiction?

Lone Survivor
Mark Wahlberg fights for his life, but does the truth hold up in the onscreen version of the battle.

Diana
Does the Diana movie reproduce the truth as well as it does the fashion?

Lee Daniels' The Butler
Does The Butler serve up the truth or mostly fiction?

Argo
Go undercover and discover the truth about the daring escape.

300
It's full of great fight scenes and lots of blood, but is the story accurate?

Breach
Investigate the FBI Agent who betrayed his country, religion and family.

Charlie Wilson's War
Did this congressman single-handedly beat the Soviets?

United 93
Meet the heroes and investigate the story behind the film.

The Pianist
Did you know that director Roman Polanski had himself been a prisoner of the Polish ghetto during WWII?

Men of Honor
Meet the real Navy diver who lost his leg but not his ability to overcome his circumstances.

Schindler's List
As a result of refusing to obey, he saved the lives of nine hundred.

Not Without My Daughter
Meet the mother and daughter who escaped from Iran.